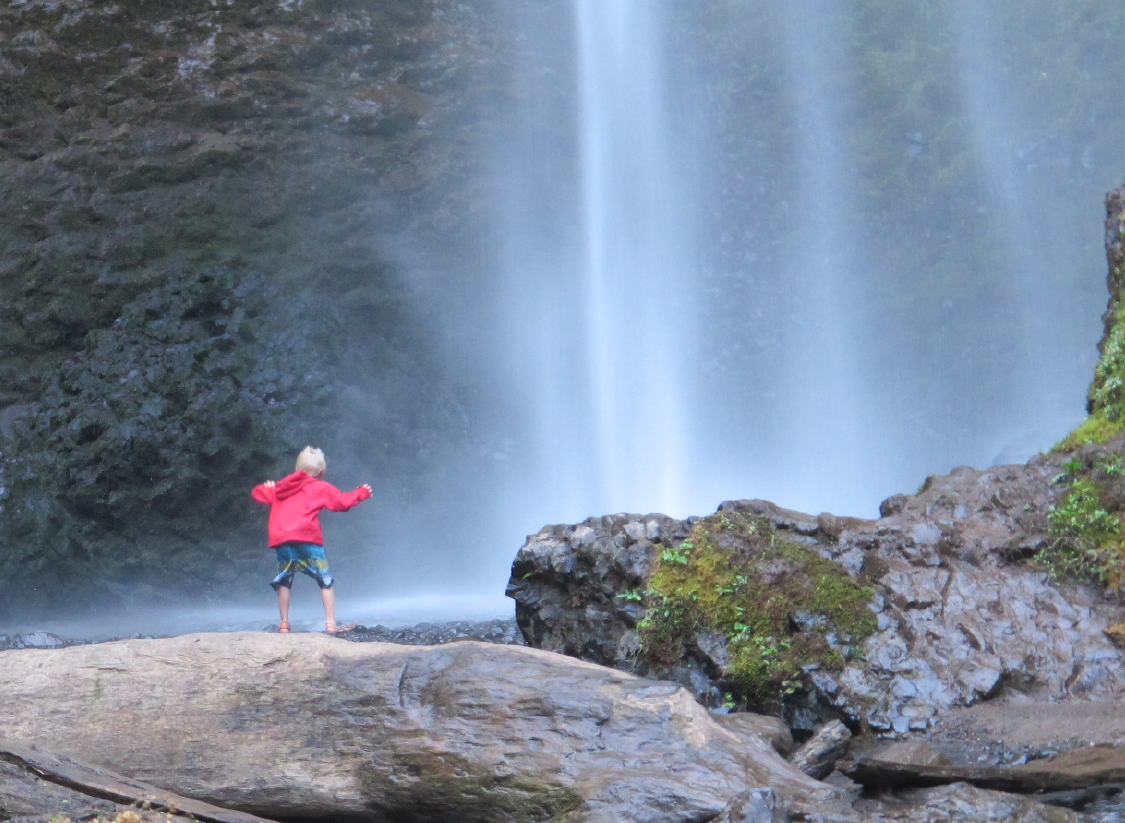 A few years ago, I was hiking in the Columbia River Gorge area of Oregon/Washington. After a two-day hike, I drove to many of the waterfalls along the gorge. I was tired from hiking with my pack on, my feet were probably sore, so at the last of at least a dozen roadside stops to see a waterfall, I stayed well back from the falls, choosing to look on from half-way there. Down the trail, where the falls were soaking onlookers, I noticed a flash of red. It kept darting into my field of vision and retreating. I focused my camera on the spot and saw the pure delight of a young boy in a red jacket daring the falling water to get him wet. He charged and challenged, roaring at the thundering fall, and then ran away with a sylph-like quickness to the shelter of a protruding rock. He got very wet. His joy at provoking the huge waterfall lifted my spirits. I can’t say it healed my aching feet, but I revel in the memory of his obvious delight.

The old tales tell of a couple who left their homeland to find out where God would take them – “to the land that I will show you.” A shepherd stopped along a rocky path to watch a bush that was aflame but not consumed by the fire. “I Am” spoke to him out of that bush—a sound he may have missed if he was not fascinated by what he saw. A beloved woman watched as her friend was assassinated, then stood by as other friends lovingly laid his body in a tomb and rolled a stone in front of the entrance. She waited, wondering what would become of her loved one; what would become of her? On the third day, she was the first observer of that empty tomb at the resurrection of Jesus. Fascination.

Carl Jung author of the title statement of this article, continued that thought elsewhere with, “the world is the oldest form of fascination.” When have you last been fascinated by the world? Daily rituals and sightings bring joy to our hearts. How many beautiful sunsets have we photographed only to forget exactly when they occurred? We “ooh” and “aah” over a delicious cake, asking for the recipe. We watch hawks soar, grin at young rabbits as they flop instead of hop, gawk at tiny birds who open gigantic mouths to be fed, and coax darting hummingbirds to our back yard feeders.  When we travel, the beauty in others’ faces or the colorful jumbles of market stalls invite our attention. It is no surprise that the things of the earth delight us. We are made for this planet home and we should find it interesting.

But we can become so inured to its charms that we begin to think that the insects, the weather, the unwanted plants (eg. weeds), the animals that invade “our” space are “other” and despicable, and then disposable. When this happens, we have failed the exam. Our work is to live well in the home we have, at peace with all of the other creatures we live among. We are not commanded to be destroyers but to “tend and keep” the earth. The ready antidote to this failed attitude is fascination.

I used to be extremely bothered when the spring invasion of ants began in my house. First at the back door, then in the dog dish and finally on the countertop. It was a regular routine and I squished and squashed ants until they outnumbered the minutes in the day I had to spare for them. I considered poisoning them by placing deadly granules around the foundation of the house. Then, I got curious. These ants were not all from the same colony—they were different sizes and colors. Some were uninterested in human food. Others were attracted to the fat in the dog food or the oily fork left on the counter. Cheese crumbs were giant treasures to the fat-loving ants. Other ants would apparently do anything for sugar. Some of the ants entered next to the back door. Some came in through the garage. Others have mysterious entry points. They only “talked” to the ants in their own families, completely ignoring ants that did not belong to their tribe. I did a little research and found out that most insects, birds, fish, amphibians, reptiles and animals eat ants. Ants are a food staple of my environment. They are also one of the necessary decomposers in the soil, helping to keep the soil fertile and garbage-free. Ants are great sources of protein and a food delicacy in parts of the world. With a little bit of fascination, I found that I was captive to a mistaken idea that every ant is a “bad” bug. In fact, ants are generally “good” and only destructive when there is already something damaging a structure, like excess moisture.

I have found ways of protecting the dog’s food (put it in a shallow pan of water), discouraging the fat ants (never leave unwashed dishes on the counter) and the honey jar is now permanently on the counter away from the outside wall of the house. Ants come and go, preening their sleek bodies with their antennae, greeting one another with an examining embrace, and trekking far distances across the floor, looking for food. These helpful creatures are no longer my enemies but sources of entertainment. Sometimes, I still get frustrated by the sheer number of ants that can enter my house in a day. Other times, I can be still enough to let them delight me.

Delight, attentiveness, fascination – these are doorways to healing rather than harming the world.